YPSILANTI — “Now in the age of the Internet, the future of comics are behind them.” 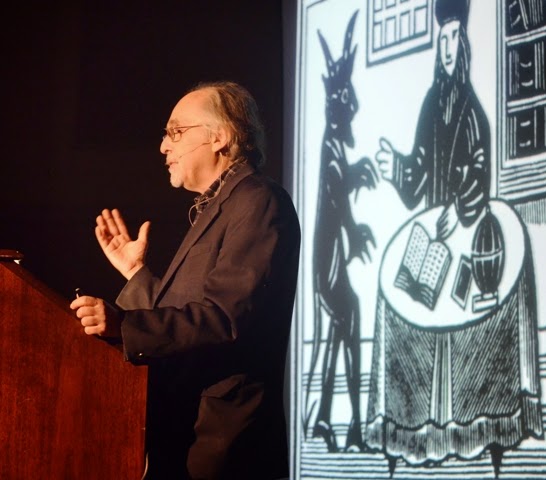 Art Spiegelman began his show, “What the %@$*! Happened to Comics,” Thursday at the Pease Auditorium on the Eastern Michigan University campus with that humdinger of a line, then spent the next nearly two hours explaining what he meant.

“It was a big deal to be able to get a person that has this much history, this much a canon of work to come here to Ypsilanti,” Gillian Gainsley, communications coordinator for the Ypsilanti District Library. “It’s library week ... and we really think that libraries are about more than just books. We’re about being part of the literary community.”

Deemed the “father of the graphic novel,” by his peers, there might not be a better person on the planet to explain “What the %@$*!” happened to the industry, and why the “future” is behind it.

“I’m demanding a blood test,” Spiegelman quips when asked about the title. “All I thought I was making was a really long comic book for grownups that demanded a bookmark and asked to be reread. That is not a snappy marketing term.”

The famed author and illustrator, renowned for his Pulitzer Prize winning graphic novel, "Maus," which was originally published in two volumes. In addition to "Maus," which took him 13 years to complete, Spiegelman has worked as an illustrator creating covers for The New Yorker magazine, and has published several other books. He’s been published as a writer and illustrator around the world, and also created the “Garbage Pail Kids” and “Wacky Packages,” trading card lines while working as a consultant at the Topps trading card company.

In 2005 he was recognized as one of “Time” magazine’s 100 most influential people, and has played himself on an episode of “The Simpsons.”


“I read ‘Maus’ sophomore year of high school and have been devouring his works ever since,” EMU student Tyler Smith said. “Having him come here really is something special.”

Bob Eccles, a reporter at the public radio station WEMU, introduced Spiegelman to the crowd prior to the start of the event.
“Art Spiegeman is one of the most influential comic artists of our time, and a huge advocate of greater comics literacy,” he said. “Nowadays (he) publishes a series of early-readers in comic form.”
During the presentation Spiegelman spoke on a variety of topics, including a pictorial history of the comics industry, his influences, career and how and why drew some of his most well known pieces. He also touched on politics, world affairs and a number of other topics. Throughout the evening he intermixed colorful language, jokes and life-lessons that only a fan of the comic book industry could fully appreciate.

“It’s all been downhill since I was the most influential person,” he joked. “I’ve been involved with reading comics for well over 60 years at this point, and I’ve been trying to learn how draw them almost as long. 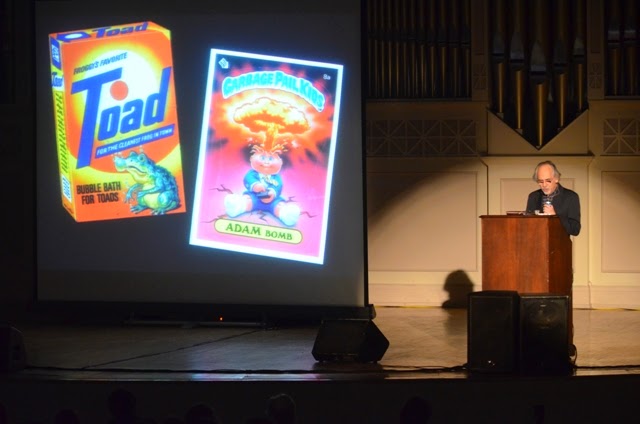 “Everything I know I learned from comic books. I learned how to read from “Batman” trying to figure out if he was a good guy or a bad guy. If I could just decode the squiggle on top of his head I could figure out if he was supposed to be scary or not. I learned about sex from Betty and Veronica, and about feminism from “Little Lulu." Economics I learned from Uncle Scrooge, ... philosophy of course from “Peanuts,” politics from “Pogo” and ethics, aesthetics and everything else from “Mad Magazine.”

He spoke on how comic books and graphic novels have grown to be an acceptable form of literature, rather than trash as they were thought of when he first started reading them in his youth.

“Now comics get taken seriously,” he said. “I get invited to libraries, universities and all that stuff. Most people used to see comics as low trash for children and mentally challenged adults.”
Spiegelman said everything changed around 1985, when comics began to be republished as graphic novels.

“As graphic novels, comics are now one of the few sections of book stores that are still thriving,” he said. “Now I hear that graphic novelists can even get dates. I’ve been told that I had something to do with the change.”

The Ypsilanti District Library brings a major author to Ypsilanti every year with the help of the Friends of the Ypsilanti District Library and other community groups. This year's visit by Spiegelman coincides with the library's spring theme, "Our Lives, Our Stories: The Greatest Generation." This season will also feature a traveling exhibit focused on the personal stories from the World War II generation, of which "Maus," a story of the Spiegelman’s father's experiences as a holocaust survivor, is a poignant example.

"We try to find people that normally wouldn’t come to this area," said Lori Coryell, assistant director of the Ypsilanti District Library. “People that maybe have a cross-generational appeal. We think it’s important to bring people with cache to Ypsilanti.”

More than 500 tickets were sold prior to the show, with an estimated 700 total in attendance including complimentary tickets and walk-up sales.

Near the end of his presentation Spiegelman said the future of comics is behind it because that’s where the history is. He expects as digital comics emerge as the prevalent form of comics that current comics will become more of a relic of days gone by.
Posted by Unknown at 12:15 PM No comments: