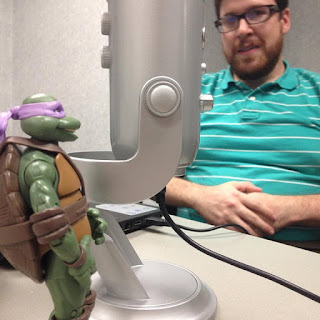 For the better part of a decade I’ve wanted to be a podcaster, but for various reasons I’ve never gotten around to it, at least not officially.
A few years back, some readers might remember the ‘Culture ‘Cast, that I started with good friend and then-coworker David Komer, but it was extremely short lived. It also wasn’t a podcast, we used a video player to post it and save on some editing time, and it was recorded on a video camera with no microphones.
It also only lasted three episodes.
LISTEN: Podbros Promotions episode 47 with Dave Herndon.
Then last year I decided to write a story about a podcasting network started by Lincoln Park resident John Bruske and a bunch of other local men.
I convinced a bunch of them to get together and chat, and even told them to feel free to record it and post it as a podcast.
They did, and I was officially featured on my first “real” podcast on the Podbros.com network.
Flash forward about a year, I was asked to be on one of the (now more than 30) shows on the network.
Bruske wanted to interview me about what it’s like being a modern journalist, how I do it and where I see the future of the industry.
I’m not used to being on that side of the table, I’m always the one asking the questions, but I think it turned out well.
The show I was on is called “Podbros Promotions,” where Bruske goes around and interviews people from all walks of life. I was lucky enough to be featured on the 47th episode which he posted Sunday morning, and I was asked back for a future episode (whether it posts at #48 or a future episode) about my toy collecting and the industry there.
Give it a listen and let me know what you think.
Posted by Unknown at 3:15 PM No comments: Links to this post

“After celebrating our momentous 10 year anniversary last year, our team really worked hard to assemble an even greater series of events for this year’s Youmacon,” said Morgan Kollin, chairman and founder of Youmacon Enterprises/Defying Conventions.  “Youmacon has become one of the staple events in Downtown Detroit and has continued to grow year after year. We hope to break our attendance records again this year and whether you’re attending your first Youmacon or your 11th, this one promises to be the biggest and best yet!”

As part of this year’s larger-than-ever Youmacon, more than 30 anime industry celebrities and special guests are expected, including actors, producers, musicians, artists and more.  For a complete list of special guests, please visit: www.youmacon.com/special-guests.

Registration is open till September 15, 2015 online at www.youmacon.com/registration. Platinum passes are available for $125 and three day passes for $55. Following September 15, tickets will only be available at-the-door.  Pricing options include a three-day pass ($60) or Friday only ($30), Saturday only ($40) or Sunday only ($20) passes.  Thursday evening’s activities are free and open to the public.  Attendees should note that tickets sales are cash only.

Created by Youmacon Enterprises/Defying Conventions, Youmacon is popular culture event similar to most Comic Cons, however instead of focusing on comic books, Youmacon is a celebration of Japanese popular culture and its influence on our own culture over the past few decades.  Common themes throughout the event are anime (Japanese animation), video games, Japanese-style artwork and comics and the rising Internet culture influenced by all of the above.  Youmacon brings a unique all-ages mix of interactive games, celebrity guest panels and live musical performances to downtown Detroit.  For more information, visit www.youmacon.com.

Posted by Unknown at 9:30 AM No comments: Links to this post

RECOUNT: My first flight was with the Blue Angels!

I’ve never been on an airplane before. Not until recently that is.
Always one to jump in feet first and ask questions later, I was offered the opportunity to fly in the Blue Angels support plane, the C-130T Hercules “Fat Albert.”
PHOTOS: Herndon's adventure with the "Fat Albert" crew.
While it’s not one of the fighter jets, it’s a plane nearly as impressive--maybe more so. the pilots and crew on this flight aren’t worried about just themselves and possibly a passenger, but sometimes dozens of others.
As the weeks turned to days, turned to hours, to minutes, my anxiety level got higher. I should have bought a ticket and flown somewhere, just so that it wasn’t my first flight.
I shouldn’t have agreed to go on the flight at all.
Why am I doing this again? I kept thinking.
But the experience was just too cool to pass up.
After what seemed like hours of waiting after check-in, a women in a Blue Angels jumpsuit emerged from the building we were standing near. My heart skipped a beat, realizing this was the moment.

She came over and gave us the first of four pre-flight briefings, making sure to mention we’d all be provided with air-sickness bags.
Next we moved a few hundred feet down and spoke with a flight engineer. He also mentioned the air sickness bag.
Good thing I hadn’t eaten in 24 hours.
After his briefing, we were allowed to walk down to see “Bert.” A truly impressive plane. We were given another quick briefing, and then turned loose to explore the massive jet.
We were not only given permission, but encouraged to shoot photos and video of the experience.
For about 15 minutes or so a group of military personnel and other members of the media were given miniature tours, posed for selfies and enjoyed scoping out the aircraft.
The pilots arrive.
I’m rarely awestruck, given the opportunity to meet and chat with people from all walks of life in my career, but this was something special.
We were allowed to listen in on the pilot briefing the crew for the day’s mission, which he spoke with such confidence and speed most of what I heard I still haven’t deciphered.
Then he turned to us and explained what he had said in terms I could understand.
The gist of it, we were going to go really fast. So fast that we would feel multiple G-forces on take off, and on the turns, and also experience weightlessness in Zero-G.
We’d be going over 300 knots, and taking off at about a 45 degree angle.
We boarded the plane for the last time, I sat between another member of the press and an female airman stationed at Selfridge Air National Guard Base.
Time to strap in.
Before the plane started moving she pulled out her air sickness bag.
Gulp.
I leaned over and told her that if she needed it, I might too. As I got mine out, I told her it was the first time I’d ever been in a plane.
Her face got ghost white. I can only imagine how many ways in which she pictured me evacuating my stomach contents.
Then she started telling everyone on her left about my first flight.
We started taxiing down the runway. I got out my phone and tweeted a quick goodbye to everyone, just in case.
And suddenly I felt like I weighed 1,000 pounds. With the G-forces I probably did, then just as quickly I was floating.
This went on for the next four hours, the constant lurching and pull of gravity, then floating and repeating.
One thing that didn’t happen, I never used the bag.
Oh, and the flight was only actually about eight minutes long. Longest, and shortest eight minutes of my life.
Then we were on the ground, the rear cargo door opened and we got to see as the Blue Angel jets taxied down the runway.
I survived.
OK I was never really that nervous about surviving, but I was anxious about not being “the guy” who needed to use the air sickness bag.
Once back on the ground the captain quickly gave us a rundown of what we’d done, posed for photos with anyone who wanted one, and then made himself and the crew available for interviews.
I pulled out my phone and noticed that he had favorited my tweet, not long after I’d sent it.
That’s right, while I was in the back worried about the flight, he was hanging out on Twitter.

Glad I hadn’t noticed that then, I might have jumped out the back!
Posted by Unknown at 10:53 AM No comments: Links to this post