When readers attack... I just had to laugh

Posted by Unknown at 8:03 PM No comments: 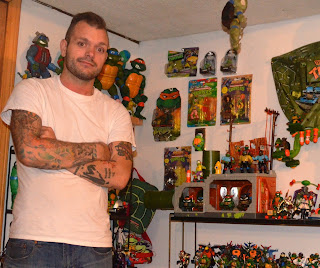 A trio of toy collectors are planning a toy show that will benefit schools and other charities.
Taylor resident Norm Stachulski, along with Monroe County resident Kris Ilstrup and Toledo resident Toby Borer are putting on the July 11 show at Trilby Park in Toledo, with a portion of the proceeds set to be donate to Toledo area schools.
“I was on the Taylor School Board,” Stachulski said, “and I see the need to give back when we can.”
The show will be open at 9 a.m. for early bird sales and 10 a.m. for regular shoppers. Admission is $6 for early entry and $3 for normal admission with children 12 and under free.
Advertised as the “My Old Toys,” toys, comics and collectibles show, it is the first show the friends have put together, but if it is successful they will plan more shows in different cities.
“The one thing we are sure of is that whatever city we’re in we’ll be donating to local schools,” Stachulski said.
Ilstrup and Borer have known each other since high school, both met Stachulski through collecting on Instagram and have become good friends who frequently go toy hunting together.
“We travel all over the tri-state area,” Ilstrup said. “We see a lot of people from our area at the shows we go to, but there aren’t other shows in the general area. That’s what we’re hoping to fix.”
Borer added that shows in Bowling Green, Ohio, and in Monroe, Wayne and Washtenaw counties are on the horizon if the initial Toledo show goes over well.
“The sky's the limit,” he said. “We want to do several a year.”
Trilby Park is at 3125 Shawnee Street, Toledo Ohio.

Go-Karts? Check.
Bumper cars? Check.
Mini golf? Check.
And the list just goes on and on from there. I'm not sure that Midway Sports & Entertainment could offer more and still be what it is.
Photos: Customers enjoy Midway Sports & Entertainment
Batting cages and water balloon fights aside, there are still more activities I haven't mentioned. This little hidden gem slipped through the cracks as I've gotten to know the Downriver area, and I'm surprised because this was right up my alley (sorry no bowling).
I hadn't driven a Go-Kart in probably 15 years, and I might have been a bit tall for these, but from the second I stepped foot into one, instantly I was 4-years-old again and sitting next to my dad as he drove me around the track.
Heading over to the batting cages, I hadn't hit a ball in probably 20 years, and after stepping in to take my chops, I still haven't. However I had a lot of fun trying.

Next up, mini golf. They offer two different 18-hole courses, both of which are difficult but not so challenging as to frustrate the player. It was perfect.
Now on to the newly improved bumper cars, which were updated recently to include a sound system and easier controls for the riders. These were always a favorite of mine as a child, and were the highlight of my night out at.
The cars were comfortable and super easy to drive. What I especially enjoyed, they seem to be radio controlled as well. If there aren't enough drivers on the course the other cars still move around and give you extra targets to bump into.
There is also a climbing wall, water balloon fighting game and much more that I didn't get a chance to try.
They don't call me the 20-Something Manchild (My personal blog at ManchildConfessions.com) for nothing, and this place brings the big kid in me right back out. (Though the 20-something part of that will soon go by the wayside as I decline into old age and turn the big 3-0 later this year.
Posted by Unknown at 9:29 PM No comments: